Dukto R6 to transfer&share files between network devices or the Internet very fast
Everyone needs to transfer or share files between the various devices on one or more devices within the local network or even externally. Previously, it would be to rely on cable connections and the transfer of hard or the use of an intermediary to transfer those files between devices such as USB device, whether it is a chip or a memory card or even External Hard
It was a tedious way and consumed a lot of time as well as voltage and the possibility of damage cables or damage to the same USB by the process of installation and removal many times
After that, Internet transport became easier, whether with Wi-Fi or cable

Today, our program Dukto is unique in the process of transferring files over the local network in the easiest ways without any complications and even without Internet connection
It is enough to have a network connected to LAN devices

The program is very simple and easy to use and we will put it out for installation and another portable does not need to be installed
The installed version of course gives more stability to the program, but in both versions there are no differences in use or sizes but my personal opinion that the version installed on the device does not occur by congratulations
Especially during the transfer of files of very large sizes 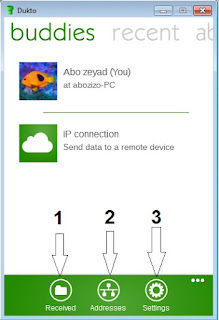 as we see
Figure 1 indicates where we find the files we received
Figure 2 addresses the devices on the network
Figure 3 is the settings
If you want to change the place of saving or changing the color, press( 3) settings 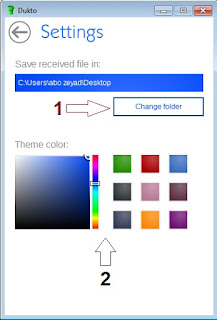 If you leave it as default, the files will be received on the desktop directly and you can then transfer them to any location in the device 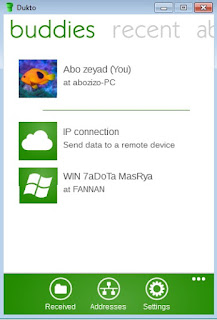 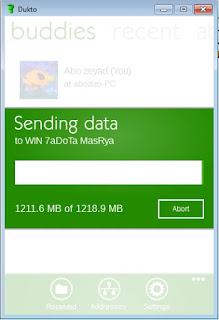 Sometimes the program crashes
This depends on the speed of the hard disk (data) or the hard disk space is not good as well as the difference between operating systems and resolve those things simpler than you imagine
It is enough to close the program and run it again and re - send the file is taken naturally
This happens most often in the portable version because it is not fully installed on the system
But as we mentioned it works very naturally installed version exactly
The program interface shows connected devices in real time and also shows you the IP number of each device
You can transfer multiple files at once
Does not need similar systems of work
Compatible with all operating systems, whether Windows from the version of XP or the following, even Linux and Mac, as well as mobile devices, laptops and other devices connected to the network transfers files all of them naturally