Designer, always needs a special touch to distinguish him from others in his designs
One of the most important things the designer is interested in is the line he uses to produce his work, whether graphic design, written, such as publications, page creation, magazines.
He always looks for the line that suits his work, relaxes in dealing with it because it highlights his work, makes him a special imprint in the markets

Many designers resort to downloading ready-made fonts available on the Internet
But there are those who have the ability and techniques to create a font, only his own lines, so he designs the font himself or modify the other lines, to get the best font.
There are many programs that help in the work of Fonts.
Here we find that the distinctive program that accepts dealing with all fonts and what we are interested in are Arabic, English, French, in addition to all other languages.

We tried a lot of programs and some problems were occurring with the Arabic language, the letters do not come out properly, but FontCreator Professional Edition is the best already, you can fully deal with fonts, in many ways, import the font from any file 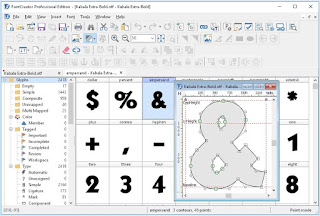 Even with a scanner, it converts images into editable characters.
As well as the possibility of making distinctive logos lines, free handwritten signature
Allows complete checks and debugging of the design, making you avoid all common errors in other programs.
One of the most important possibilities of the program, there is a tool called OpenType TrueType, which is to design, create, edit fonts completely.
It can also import fonts from vector files EPS, AI, PDF, and others
Image files, BMP, GIF, PNG, and others
Create and edit WOFF open web fonts
Colored lines can be created in your own colors, which you can modify and develop
It also includes an awesome tool, dealing with Arabic fonts OpenType Designer
See how to run and use the program

The program is a full portable version that does not need to be installed, just unzip one of the following programs
Software Specifications
High-Logic FontCreator Professional Edition 11.5.0.2422 Portable
The size of the program is 30 MB
Supported Operating Systems All versions of Windows with 32-bit and 64-bit

Very soon this site will be famous among all blog users, due to it's fastidious content