When installing a new operating system, it is certain that the system is installed without additions and utility programs to match the programs we need, as well as operating, improving the performance of games.

One of the most compulsorily required applications and basic software packages in installing a lot of programs and not integrated with the Windows operating system is the Microsoft .NET Framework program, although it is produced by Microsoft that produces Windows versions, but the .NET Framework is not among the programs integrated into the pure Windows system or others Rate and course is the surest and best to use

To install modern programs on Windows, a recent version of Netframework must be installed

But you may encounter a problem when installing the program with the latest version, especially if you are using a relatively old Windows operating system such as xp or win7, and this is certainly due to the failure to update the system files, but the update and its problems do not interest us from using a large space to store the update files in addition to some technical problems that may occur after Complete the update, and this is not a defect, as in Microsoft or its products, but because of the applications we use, they may interfere with the updates and cause problems

In this article, we will dispense with updates or even change the system and use the NetframWork version that works efficiently on all operating systems and addresses a lot of errors and problems. After installing it, you can install the latest version if you ask for it, whether because of my compulsion, which is to force you to the program or game that you want to install To install a newer version of the Microsoft .NET Framework, or you prefer to update the version yourself

Today our date is with the release of Microsoft .NET Framework 4.5, which is considered the best and most suitable for users from Windows XP to Windows 10 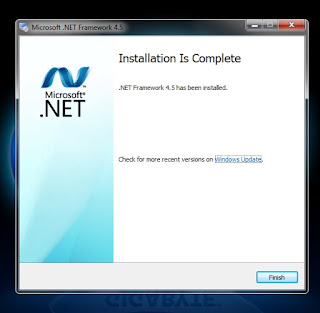 The program is complete and can be installed directly

The size of the program is 66 MB

The two programs are contained in one compressed file