Company "Google" work in cooperation with the company "to LG and laboratories MC" to manufacture smart clock fitted with an electronic chip from Sully Project Soli project, can the new hourly control through hand movements, without the need to touch it, along with its support for the possibility of control by the rhetoric and touch, thanks to the user, including radar, which can track hand movements, and disclose and translate them into commands to control smart smart clothes, watches and other devices. 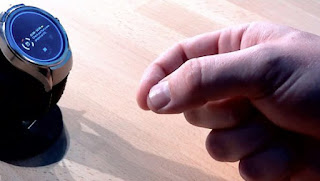 The demo showed a time which was built in partnership with "LG" the possibility of passing the messages on the screen by moving the clock hand back and forth model, you can also choose a message for the time to read it completely through some clicks light fingers.
Can also sensor movement from a distance of up to 15 meters detection, which allows its use in other products such as audio revealed by the company, which is based in collaboration with JBL company amplifier, which uses algorithms Soleil project in order to move between music using hand movements.
The "Google" has offered Soleil project for the first time during the Google I / O conference last year, worked the company since then with about 60 a developer to develop the technology, and provided them with the tools necessary to build identify objects that work with wearables possibilities.
The company has this year introduced a new chip belonging to the Sully project, which the development team to re-design based on the old slide that was displayed last year. The new chip smaller size, and reduce energy consumption by up to 22 times with an increase in efficiency.
The "Google" to work continuously to develop Soleil project and its chip, which is still in the developmental stages, the company did not reference to the expected date for the release of these new products to those operating the slide